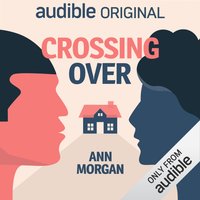 My second novel Crossing Over is out now as an Audible Original audiobook. Narrated by Adjoa Andoh, it tells the story of an encounter between 87-year-old Kent coast resident Edie, who is in the early stages of dementia, and Jonah, a traumatised Malawian migrant hiding in her barn.

You can read more about the book here and download your copy here.

My debut novel Beside Myself was published in English by Bloomsbury in 2016 and has since been translated into eight other languages. A literary psychological drama, it tells the story of a pair of identical twins who swap places in a childhood game, only for one of them to be trapped in a nightmare when the other refuses to change back.

You can read about how I came to write the book on my blog. If you like the sound of it, you can order your copy here or through your local bookshop.

Here’s a taste of what writers and book reviewers have said about Beside Myself:

‘A blisteringly clever novel about identity’

‘A compulsive, dark and strikingly well-written novel that grips from the first page until long after the last’

Nathan Filer, author of The Shock of the Fall

‘This is such a powerful and satisfying novel’

Rebecca Wait, author of The View on the Way Down and The Followers

‘A most modern and metropolitan fairytale… Fabulous’

‘Full of twists and surprises, this thrilling novel will leave you both shaken and stirred’

‘Ann Morgan has made her mark with this powerful novel, and I look forward to whatever she writes next’

David Bell, author of Somebody I Used to Know

Reading the World or The World Between Two Covers

Reading the World: Confessions of a Literary Explorer or The World Between Two Covers: Reading the Globe (as it is known in the US) was inspired by my 2012 blog project ayearofreadingtheworld.com, a year-long journey through one book from every country.

Bringing together extensive research with some of the extraordinary encounters from that year, it explores the big questions raised by the quest.

From how censorship, translation and publishing trends affect how we access and interact with texts to the way reading shapes our perspective, the book shows the power of narratives to change and connect human beings. It documents the experiences of people creating and sharing stories in some of the most unusual circumstances known to humankind. And it reveals the exceptional moment in history we are living through, in which it is possible for one person at home to encounter literature and the world as never before.

Reading the World: Confessions of a Literary Explorer was published in the UK and Commonwealth (excluding Canada) on February 5, 2015 by Harvill Secker/Random House. You can buy it here (or from your lovely local indie bookshop).

The World Between Two Covers: Reading the Globe was published in North America in May 2015 by Liveright/W.W. Norton & Co. You can buy it here (or from your lovely local indie bookshop). The book is also available as an audiobook here.